The understanding of pushing hands (Tui-Shou) is extremely important to the vital forces and practical principles that influence the yin/yang schools and to those who adhere to the “Five Element” principles. One of the foundations of tai chi chuan is called the “Eight forces,” or “Eight Gates,” or “Eights Jings.”

The Eight Jings are: peng,  ward off; lu, roll back; ji, press; an, push; ca, pluck; lie, splitting/rend; zhou, elbow stroke; and kao, shoulder stroke.  The first four Jings are directional and recognized as the four main energies protecting the directions of North, South, East, and West.  The “Song of Four Directions,” is a concept that reflects the principle of the four main jings.

These eight forces/energies or Jing, all combine with the following five active movements which are step forward, retreat backward, look left, and gaze right, as well as hold the center.  Combined together the Eight Jings and the five active movements are called the 13 postures. They are the concealment of possible strategic initiatives and conceptual realism’s dealing with absorption and expansion.

These eight powers act as a multiple value function and conceal energy techniques and theories in harmonic progression.  This conjugates the principle theorems of yin soft energy and yang hard energy into a body of energetic density.  In turn, it agitates the capacity to store energy within every movement, making tai chi chuan the containment of energy in motion.  This containment is in the posture and alignment and the gathering of the principles, while linking them into a shape in which they can be expressed.  The focus will be as clear as its opposition, meaning that the movement will reflect both the imminently real or probable, and the imaginable.   It will be direct yet the concept will exist in a state of fluidity.  However, the motion isn’t primarily external, it generates internally and resonates and is expressed externally as a type of conceptual realism.

Within the study of the governing concepts of the Eight Jings, there are three more jings (ting jing, hua jing , and fa jing}, which are very important in the learning and development of Push Hands.  Jing translates to mean force/energy, and it’s the expressive energy that is embedded in the mechanics of proper technical skills and understanding of the principles and concepts as they should be performed.  All movements can be expressed within a certain concept, at will, with jing power.  The combination of “yi,” mind intention, and “shen,” spirit/mind, and “chi,” vital energy, should permeate and gather internally and be felt and seen externally. “Ting Jing” teaches the skill of listening not merely with the ears.  However, your entire skin must come alive and be elevated to a heightened state of sensitivity. “Hua Jing” teaches the skills of redirecting/neutralizing the opponents force, and “Fa Jing” teaches the skills of issuing energy.  A reasonable amount of time should be given to developing a relationship with each of these concepts to assure proper development. 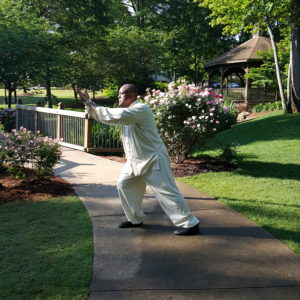 “Peng Jing” translates as ward off.  It’s an explosive outward energy of expansive mind/body connections.  Energy is expressed upward and outward, disrupting the opponents center and using one’s whole body/posture, unified, through gathering, strengthening, transforming energy and returning it back to the opponent explosively. “Lu Jing” translates as rollback.  The challenge is to receive and lead the oncoming force into the emptiness while dissolving into the void.  “Ji Jing” translates as press and the idea is to squeeze energy by collapsing and gently squeezing inside the elbow while collapsing and concentrating the force of energy into a small area.  “An Jing” translates as push.  The goal is to merge with the opponent’s force, either pushed downward or upward received, and return force pushing into the earth.  “Cai Jing” translates as pluck, and implies disturbing the opponent’s balance/structure by executing a quick plucking/pulling motion downwards, and usually on an angle uprooting the opponent.  “Lie Jing” translates as rend.  Here, the purpose is that while one limb or body part pushes or pulls, another moves in the opposite direction in a kind of ripping or tearing action.  The responding energy should balance out the action splitting opponent’s energy.  “Zhou Jing” means elbow.  Usually the use of the elbow is an advanced technique and is within the form, hidden within the general movements of the form itself.  The use of the elbow is very forceful.  It has penetrating power when combined with intention and proper alignment of the body using full body weight behind it.  Elbow, forearms, shin and knees are used with this jing.  The striking surfaces execute penetrating force when used properly against the opponent. “Kao Jing” translates as shoulder stroke.  As mentioned above, the entire body is used in tai chi as a weapon.  Tai chi also uses the back, stomach, waist, and body bumping which uses the entire body to strike or block. There’s an old saying that describes the concepts of expressing energy in tai chi chuan, it states:

Energy is rooted in the feet, absorbed by the legs,

directed by the waist, then manifested in the hands/fingers. 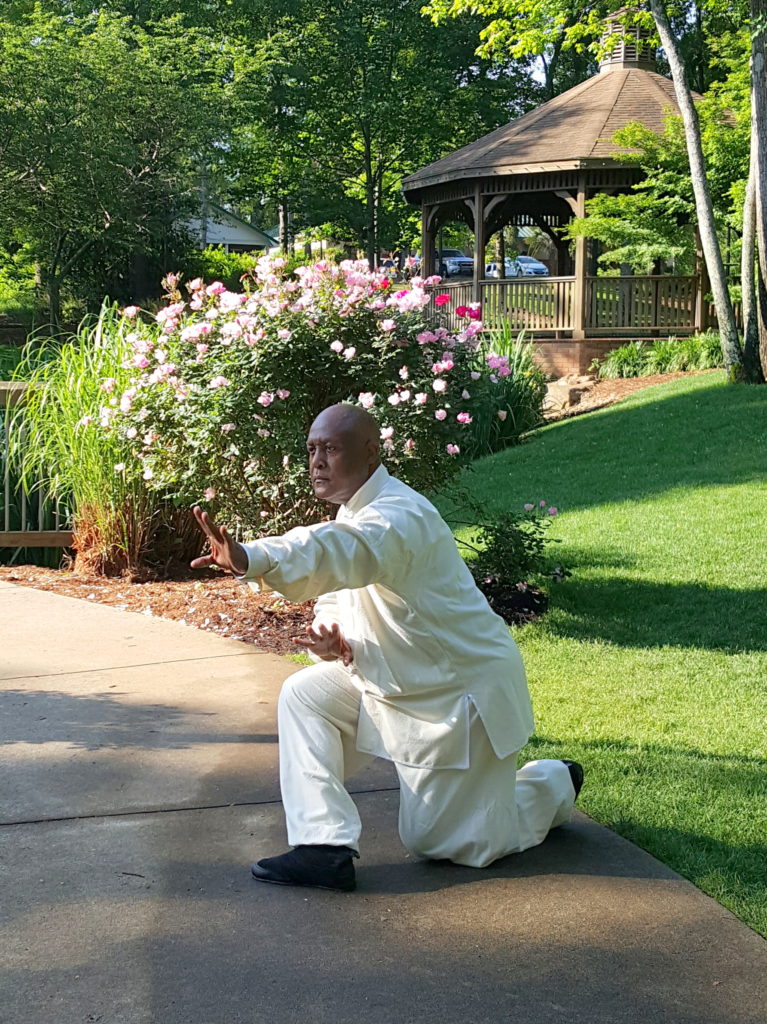 In the studying tai chi chuan, these concepts should be studied and expressed in all thoughts /movements. The Eight Jings are visually simplistic wrapped in intricate complexity.  Becoming acquainted with concepts such as Ting Jing, Hua Jing, and Fa Jing will increase your ability to execute the concepts within the eight forces.  However, you should spend time with understanding the concepts that are so deep and rich within the soil/strata of yin and yang and are infinite in the combinations that may be expressed.  Limitations exist upon the individual’s lack of understanding of the Eight Jings.   Having a better understanding of the three jings, Ting, Hua and Fa, will elevate the concepts of join, stick, and follow.   Join reminds and teaches us to forget about the self and to join as one with the opponent in all of his moves.  Stick brings to mind the concept of becoming one …no separation.  It reminds us that there should be no separation between us and the opponent.  Follow teaches us and reminds us to stay in the moment and adapt every minute motion that is executed by the opponent, then change it immediately to shadow the opponent.

…and the student asked the Master: “What do you mean the movement must speak to me?” …and the Master only smiled.

So, the question is, how do you expand your vision? Exposure to superior challenges presents an opportunity to grow and strengthen the roots of your experience. Through the constant clashing with successes and failures, one develops a clarity of vision that leads to a path of accumulating the essential traits that will assist in developing along that path. Perception is a reflection of an individual’s state of mind, knowledge, and experience. Through clearing your perception you can refine judgment, enabling you to make better selective decisions. You have begun a journey of self-awareness and expansion.

Self-awareness is both physical and mental. and to begin the journey, it is best to start with the mental aspect, since the mind controls the body. A vital and important aspect of self-awareness is self-image. You must have a clear vision of your self-image in order to mentally see yourself accomplishing what you desire. Clarity of vision begins within oneself. Before you can have harmony in your outside world, you must first harmonize your inside world (mind). In the process of clearing vision a better relationship of ones own strengths and weaknesses begins to manifest. Through the process of expressing the desired movements through a variety of exchanges, a knowledge and clarity of possibilities develops. Movement must be able to fit within the confines of your abilities, strengths and weaknesses. When you are able to do so, they will be expressed naturally and effortlessly. Once you develop the mind/body relationship, you will begin to speak the language of movement, which is expand/collapse, hard/soft, straight/circle, and many more possibilities. However, you must allow the movement to communicate to your body. Through mastery of knowing, and achieving a clear mental self-image, you can combine the powers of the mind and the powers of the body to express the language of the movement.

…and the movement has spoken.